Why a Consistent Sleep Schedule is Important

Why catching up on sleep during the weekends is bad

Do you sleep in through the weekends to get “caught up on rest”? Assuming this is the case, you might need to reevaluate your process. For adults, utilizing ends of the week to make up for the lost sleep can potentially present some health hazards. The most common being late-night munchies and weight gain. Weekends seem like a great opportunity to catch up on that missing sleep of tiring and endless seeming week days but recent studies do not support that common thought process.

Christopher Depner at University of Colorado carried an experiment to further explore this. They made 3 groups of 20 people each, who followed a given specific sleep schedule. First group slept for 8 hours at night, second group slept for 5 hours at night and the third also slept for five hours at night but they could sleep on weekends as much as they want. They stayed up late on Fridays and Saturdays and the following mornings they slept in until sometime between 11 am to noon. They also stayed up late on Sundays not leaving them enough time to sleep before next working day. Overall they slept more than what their body needed. The research concluded that the contributors did sleep extra but it wasn’t enough to catch up on all the lost sleep during the weekdays.

People in the study who slept little gained weight, so is the case with the group who stayed up late night and slept in the weekends. In total the research concluded that both these groups gained an average of 3 pounds of weight during this timeframe.

Depner wrote that reason behind this could be the lost sleep clashes with the hormone that control hunger. Since they woke up later than usual time, they may have gotten hungry later than usual time. So they ended up eating late night snacks including potato chips and fast food. Studies also show that people who slept less during week days showed less sensitivity of insulin in their body resulting in indigestion of food.

“That was very unexpected,” Depner says. It was clear by this that sleeping less during weekdays and sleeping in on weekends surely had negative health impact.

How to maintain balance

What should you do to maintain a balance? It is advised that you wake up at the same time even on weekends or maybe if you sleep 8 hours on weekdays you may sleep 9 hours on weekend rather than sleeping 5 hours on weekdays and 11 hours on weekends. So next time you plan to sleep in on whole weekend just try this routine and with some consistency you will find a balance. That way you can do some productive work on weekends too. For example, meeting with friends, playing sports or finishing that DIY project that you have been looking to do for months.

If getting a good nights sleep is due to a worn out mattress then contact Sleep Station for affordable mattress solutions.

Sleep Station is your source for name-brand closeout mattresses up to 75% off regular retail prices. Our commitment to providing the best sleep solutions remains unmatched. We invite you to stop by your nearest location in Memphis or Munford to find the perfect mattress for you!

How Much Should You Spend on a Mattress?

Soft or Firm: What Mattress Type Is Best For You?

What Size Should a Child’s Mattress Be? 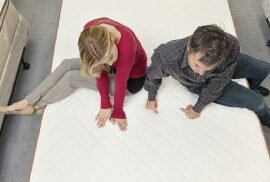 Is A Closeout Mattress The Right Fit For You?